A Beautiful World | How Your Story Sets You Free
1577
portfolio_page-template-default,single,single-portfolio_page,postid-1577,ajax_updown_fade,page_not_loaded,,qode-child-theme-ver-1.0.0,qode-theme-ver-7.6.2,wpb-js-composer js-comp-ver-6.0.5,vc_responsive

How Your Story Sets You Free

More About "How Your Story Sets You Free"

How your story sets you free

Everyone has a story to tell, and telling that story can set you free.

That’s according to Heather Box and Julian Mocine-McQueen. The storytelling coaches are married, and have 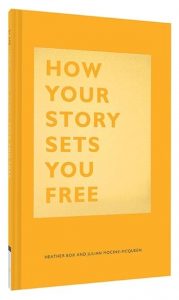 spent their careers helping others find, craft and tell their stories. Heather Box says we have an obligation to tell our stories, in order to better reflect who we are, and help others.

“It’s about standing, and all of who you are while you have the chance,” she said.

Box and Mocine-McQueen have coached speakers on the TED Talks main stage and at the United Nations. They started The Million Person Project, a global initiative bringing together activists, artists and business people from around the world. In their book, “How Your Story Sets You Free,” they impart many of their story-coaching techniques. They also reveal how to embrace the power of your own story.

Box says we’re hard-wired to love stories.  “It’s the way that we relate to people,” she said. “ There’s an instant connection and it’s the way we find each other. And so that’s why. We believe in the power of stories to connect the world the way that we do because of that connective power that they all hold.”

Her partner and co-author,  Julian Mocine-McQueen, says they’ve worked with people from 13 to 80 years old, 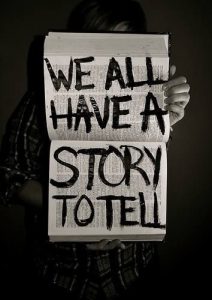 and they’ve learned everyone has a story to tell.

“We’ve worked with people who’ve had very big lives, and we’ve worked with people who are still in the town they grew up in, but everybody has wisdom that they’ve gained,” he said. “You never know who might be moved by your story. Some people have stories with dramatic turning points, but we gain so much wisdom in our ordinary day-to-day lives, in small moments and quiet moments. We like to work with people to share those stories as well.”

So how do you find your story? The story you want to tell? Box and Mocine-McQueen recommend starting by making your own map: a life map.

To create a life map,  you sketch out your entire life on a large piece of paper, from the very beginning to where you are today, using stick figures and drawings and anything you want to illustrate the many plot points and characters that compose the story of your life. The beginnings, endings and turning points; the celebrations, the sadness and all of your choices.

Mocine-McQueen said we aren’t given a lot of opportunities to reflect on our journey. Or what moves us, what guides us, what values we might share with others, what beliefs move us in our day-to-day lives. “The life-mapping process is like you are panning for gold,” he said. “It’s that big scoop. From the bottom of the creek. That we just get everything and we get to see everything that’s there. And then the process of uncovering. — the  threads and the narratives that you want to share. It’s like shaking that gold pan and seeing what rises to the top.” 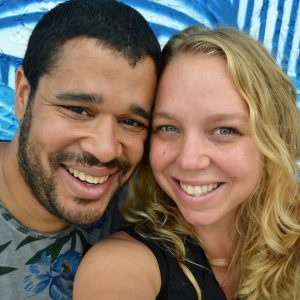 Box said their biggest tip for finding your story is to identify the listeners you want to move. Your friends? Family? A certain group of people? The entire world? She said it’s important to be specific.

“Are you telling your story so young people have a better understanding of what it means to live a positive life while navigating depression? Are you telling a story about what it means to find joy every day in parenting, even through the hard times?  Are you telling a story about climate change for people living on the front lines or for the policymakers? You have to identify who your audience is first, and why you want to impact that person with your story. Then you can start crafting how to share the lessons learned and putting together the narrative arc.”

After panning for gold in the riverbed of your memory, Box said, the next step is to rehearse and carefully craft your story.

“Many people believe authenticity means sharing stories off the cuff,” Box said,  “but that’s not true. Your most authentic story usually takes some digging, and pulling together threads that you may not have seen as connected before. Crafting your narrative with intention can be such a powerful experience, allowing you to stand in your authentic truth.”

They stress that your story does not need to be big. You don’t need to share your story with the entire world. Your story might be a story for a very intimate audience.

Box recalled a poignant moment at one of their workshops. “I remember one man in particular did his life map, and he came up to me afterwards and he said: ‘Look, I don’t think I can ever share this publicly, but I’m going to share this with my kids, I’ve never really let my kids know who I am. They don’t know anything about me.’ And when he said that, we both had tears in our eyes, because that’s so meaningful. That could change his relationship with his kids forever.” 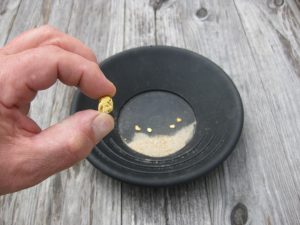 your specific story, coming from your unique voice.

They say it’s common for people to believe they have nothing to teach, or they don’t have a story, or they haven’t really been through anything that could be helpful to somebody else. Then they start talking. They start doing their life map, and they uncover stories. Stories about getting sober, about having the courage to go back to school later in life,  living with a disability, supporting a family member while dying, surviving sexual assault, navigating racism, leaving a job because it wasn’t right for you.

“All of these things, big and small, can be so incredibly helpful to somebody else. We always want to wait until we’ve made it before we share our story,  but these real stories coming from real people are what changes lives,” Box said.

She said some people hesitate to tell their story because someone else is already talking about the same subject. That shouldn’t discourage anyone, she said.

“Sure, maybe there’s someone else sharing a story like yours, but it’s not coming from you. Your unique voice is going to impact a different set of people than that other person. So, it’s important for everybody to own their story and value it, however big or small. You have stories in your life that show how your wisdom has been shaped, and that can be valuable to somebody else.” 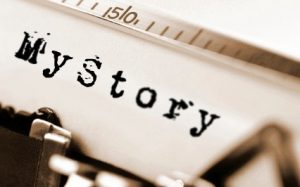 She added that there’s always the fear of being judged or criticized if we reveal our story. “A lot of us are worried about what people will think of us, if they knew who we really were. If they knew what we’ve seen. My question is, do you really want to be associating with people who would turn their back on you if they knew who you truly were?”

Mocine-McQueen said your story sets you free when you’re willing to look at what’s happened in your life.  “Look at your story, look at the ups and downs,” he said. “Then stand in who you’re choosing to be. That’s where the freedom is.  Standing and saying, ‘Yep, I’m not proud of it,’ or ‘Yep, it was horrifying, I wish it didn’t happen, but here I am, and I’m still here, and I’m still contributing.  In fact I have more to contribute.’ That’s the freedom. Harnessing the power of your story and taking something that when left unexplored, when left untold, might be a source of shame, but when you explore it and when you share it, now becomes a source of power.”

Box said your story sets you free when you take ownership of all the things that have happened to you — the good, the bad, the unthinkable and everything in between.