More About "Man Survives Being Buried for Five Days" 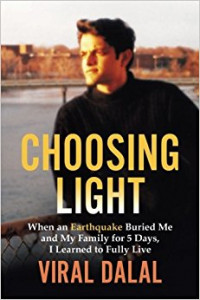 Viral Dalal (VEE-rull DAH-loll): I heard this sound in the background which sounded like thunder, loud thunder and that woke me up. I was sleeping at that poiunt in time I woke up to thunder – furniture moving and became airborne. and I knew it was an earthquake.

Heather McElhatton: On January 26 2001, a 25 yr old student named Viral Dalal was vacationing with his family in the eastern city of Bhuj, India when a 7.7 magnitude earthquake struck, destroying the building they were in.

VD:  I didn’t know where I was, because the whole building had collapsed, all I knew was I was in this little space. which was very dark.

HM: As the building collapsed and fell sideways, Dalal became trapped under a mangled mountain of rubble for five days.

VD:  I was inside the rubble for 5 days, in total darkness, with no hope, no food, no water or movement.

HM:  Dalal was trapped between concrete slabs that boxed him into a space about the size of a coffin. He was under 30 feet of rubble, the ceiling which had been 8 feet above him in bed, was now two inches from his face. As the decimated city outside reeled from the horror of thousands of lives lost, Dalal lay alone in the darkness for 5 days.

VD: I was trapped, but miraculously none of my body parts were underneath any kind of rubble.

HM: He was wearing an iridium watch, which his father gave him, that provided a small blue light, allowing him to examine his prison and keep track of time as it passed slowly. His main concern was his family. He thought of them to keep himself going.

VD:   I continued to survive, but as days went by hunger and thirst were terrible. But the goal was to survive and be with my family.

HM: Dalal drank his own urine to quench his thirst, and says he imagined rancid food and eating things he hated, like eggplant, to control his hunger. Five days later he heard sounds, a truck rumbling, the sound of a diesel engine, and then voices calling to him. He shouted and guided rescuers to his position under the rubble. He says the first ray of light broke open at his feet and rescuers dragged him out feet first. They took him to the hospital but within an hour Dalal was back, searching the destroyed building for his family. He discovered over the coming days of searching, that they they had all perished along with thousands of other earthquake victims. News outlets around the world called Dalal “a miracle boy.”

NEWSREEL: A Hackensack college student has become earthquake miracle story as the death toll continues to rise…in the aftermath of the deadly India quake. rescuers found Viral Dalal in the ruins yesterday 4 1/2 days after thew quake. rescuers say when they pulled him out there wasn’t a scratch on him. ^The last report though the death toll stands at twelve thousand.

HM:  Dalal says After he was rescued he had to find a way to stand back up on his own, without his family.

HM:  In his book, “Choosing light,” Dalal recounts his ordeal and credits his friends, extended family and Hindu scriptures with helping him survive.

VD:   My idea of a beautiful world is to continue to be happy and to strive to remain happy. It is very easy to be unhappy. . and if you work only on your present moment,making it happy that moment will eventually become your past – then you can say my past is full of happiness. and present is happy too. your future is never guaranteed. for me, to work only on your present and make the present moment happy is all you need.

HM:  to learn more about Viral Dalal’s amazing story of survival visit us online at www.abeautiful.world. I’m Heather McElhatton and this is A Beautiful World.     Viral Dalal Website

Waking groggily the next morning, I could hear my Dad and Mom’s voice, also the musical sound of Shalin’s younger voice in the background. Turning over on the mattress that had been laid on the floor for me I thought, it must be close to 8:00 AM, as I could see the bright sunlight from the bedroom window. It seemed like someone had already opened the bedroom curtains. I wanted just a few more minutes of sleep. From out in the kitchen I could hear Roshan’s voice. 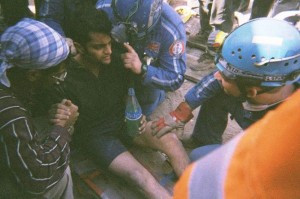 “Mom, Shalin was playing till 1:00 AM with Viral. It was fun watching them play.”

My mother must have said something about little boys needing to get to bed at a reasonable hour. I heard Roshan chuckle. But Shalin was not ready to go to bed!”  I pulled the covers up over my eyes to keep out the morning light. Everyone seemed to be having breakfast or morning tea out in the adjoining dining room. I could hear my mom laughing and talking to Shalin in a baby’s tone. I knew that any moment my dad would come and wake me up. Not even a minute had passed, and there he was.  Viral, get up!” he ordered.

I pretended to be wide awake. “Give me just another 10 minutes Dad, I was up late last night.”

“Get on the bed if you want to sleep then. I need to put your mattress back in the other room and clear this one” he said.

Trying to keep my eyes open, I shifted to the bed and curled like a caterpillar underneath the thin blanket. Seeing this, my Dad picked up another thick comforter and threw it over me, covering me from my head to the toe. I was quite surprised. I had not seen such a gesture from him when I was younger.Uncovering my face, I could see my father’s tall figure move to the window where he pulled the curtains closed for my comfort. I felt pampered. Then, snuggling under the blanket I checked the time on my watch. It was 8:35 AM. We would be leaving for the resort by 9:45, I guessed.

I can sleep till after 9 then, I thought, and closed my eyes. A sound like thunder woke me, as I opened my eyes inside the comforter. It was surprisingly very loud and seemed to be coming from a far distance. I’d never heard thunder this loud before, and there was something different about this sound but I couldn’t tell what.In a moment I realized that the sound wasn’t stopping, but only getting louder and louder. In my groggy state I thought lightning had struck somewhere nearby.

Pulling my head out from under the comforter I looked towards the window covered with curtains. It seemed as if it had gotten cloudy outside, making the room darker, while the very loud rumbling noise from outside continued to build. Maybe it’s not thunder. Someone upstairs is moving heavy equipment. But I realized that was not right either, and the sound became a roar. Bombs? What if Pakistan has attacked India? Bhuj was not far from the border, and it was 26th January, the Republic Day of India. Before I could take the next breath, the floor began to shake, the bed shook and rattled up and down, and the dresser and mirror rattled against the wall.

Earthquake!  The shaking grew more fierce, the intensity mounting by the second, and the roar became even louder. My bed, along with everything else in the room shook wildly, nearly tossing me out and to the floor. A large and heavy metal cupboard wobbled and tilted and scraped its way across the floor.  RUN TO SAFETY. GET EVERYONE OUT…..

Before I could complete that thought, everything started to become airborne. I, My bed, the metal cupboard, the dresser – all of it was slamming against the floor and being thrown back up in the air in a wild and jarring motion. From all around I could hear glass shattering, and the sound of kitchen utensils clattering to the floor.

Now the deafening and ever-growing rumble seemed to be coming from right underneath our building, and the shaking became even more violent.The ceiling fan right above me looked like a pendulum, swinging crazily in all the directions, its blades scratching the ceiling. The ferocious roar was like the sound of a monster coming out of the earth’s crust, and a series of enormous explosions were going off underneath the ground.Kicking off the comforter I tried to get out of the wildly heaving bed. But I couldn’t. I was being tossed like a rag doll. Suddenly, plastered cement and concrete pieces started falling off the ceiling. I had to get outside the building! Now the walls started to give way. A six-inch wide crack split the floor. Big pieces of plaster were falling and dust clouds rose.

Unable to move, I had never seen anything more dreadful and terrifying in my life. And I knew ceiling could fall any second. Another powerful jolt shook my room and I looked up again – unable to believe what I was seeing. Steel rods inside the ceiling were exposed, twisting and pulling out from the walls, and the whole, huge concrete slab of the floor above me – bigger than a car and weighing tons – cracked before my eyes and started to collapse.