Used by Charles Darwin to describe colors in the field, “Werner’s Nomenclature 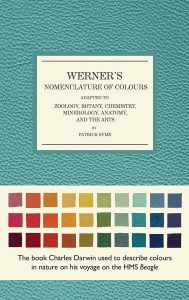 of Colours” is one of the first color charts ever created.

“The naturalist Charles Darwin, he actually used to carry a copy with him, when he was on his travels, and he would literally pull it out so he could name the precise colors that he saw,” says Colin Ziegler, 53, Head of Publishing for the Natural History Museum in London.

“It’s basically a practical guide to the colors you find in nature. Nomenclature literally means ‘the devising or the choosing of the names for things,’ and this book really does exactly that.”

Back in the early 1800’s, there was no universal or reliable way to describe colors. There were no set names for colors, no Pantone books, no color charts, and still many years to go before photography was invented.

Printed in 1812, WERNER’S NOMENCLATURE OF COLOURS was one of the 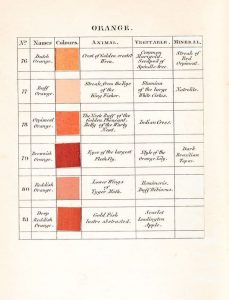 first color dictionaries ever assembled. It’s based on the work of a mineralogist named Abraham Gottlob Werner, which was later expanded by Scottish artist named Patrick Syme, who took Werner’s work and included ‘like colors’ found in the animal, vegetable and mineral kingdoms.

Before color dictionaries, there was no standardized way to communicate a color. What is crimson versus carmine? Is my idea of lavender the same as your vision of violet? Werner and Syme’s work helped universalize the language of color.   On each page of the book is a long list of colors, grouped by category. greens on one page, reds on another. Each color is identified by its name, an actual painted swatch of that color, and several examples in nature that contain this color. Darwin used Werner’s book of colors to help him paint pictures. 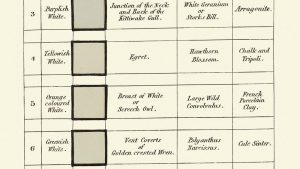 Werner’s book is the foundation on which future color charts would be built. One wonders what he would think of color names today like, “Drunk Tank Pink” and “I’m Not Really a Waitress.” There’s no question time and technology has broadened and complicated colors, but it’s a treasure to see the foundation on which our current chaotic color world was built.

Colin Ziegler likes “the very simple” colors like, ‘Snow White,’ which is the purest 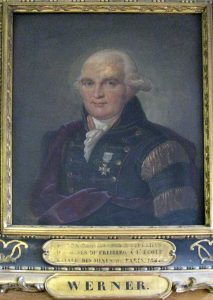 white color, being free of all inter-mixture it resembles new fallen snow. And Ink Black, being Velvet Black with a little Indigo Blue.

“But maybe my favorite, is Flax Flower Blue, which is described as being Berlin Blue with a slight tinge of Ultramarine Blue and it can be found in the wings of Devil Butterfly, or of course, in the Flax Flower itself, or in blue copper ore.”

“And then you have straw yellow which is Sulphur Yellow mixed with much Greyish White and a little Ochre Yellow – and it’s found in the polar bear, oat straw and shore light calamine. I doubt those three have ever been compared anywhere else.”

Every color in Werner’s Book evokes a new vision, a new connection, a new poem inspired by the world in which we live.  Werner’s Nomenclature of Colours has been recently re-released in a portable hardcover edition by the Natural History Museum in London. 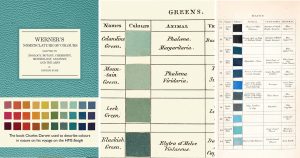