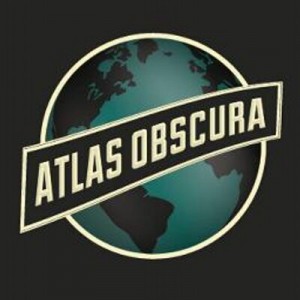 Dylan Thuras: Life is more worth living, more deep, enjoyable, meaningful when you’re engaged with the world in a curious open way and you’re willing to take chances, go wandering, a little bit with the hope that you might just expand your sense of what’s possible in the world.

Dylan Thuras: It’s funny, because outside the Uffizi (Museum) are these lines that are six hours long and these tourists that are just tired and bedragggled and may not even want to go see the paintings in the Uffizi, but they feel like ‘Ok, this is what I’m supposed to be doing here.‘  However if they walk around the block and go into the history of science museum (The Galileo Museum),  among these armillary spheres and loadstones and incredibly beautiful telescopes is this little glass egg with a small human fragment in it and it’s Gallileos middle finger.

Heather McElhatton: Dylan created Atlas Obscura with Joshua Foer and Ella Morton, as a compendium of places for people who prefer taking the road less travelled.

Dylan Thuras: The stuff that was out there  was out-of-print books, and a few websites, but nothing comprehensive or worldwide and nothing that treated this stuff with respect and intellectual curiosity and didn’t just say, “Oh thats weird.”

Heather McElhatton: Atlas Obsucra features the weird, the unexpected, the overlooked, the hidden and the mysterious. Like the dazzling glow worm caves in New Zealand, a baobob tree in South Africa, that’s so large it has a pub inside where 15 people can drink comfortably. Or ancient stepwells in India, a Baby Jumping Festival in Spain, an eccentric bone museums in Italy, a weather-forecasting invention that was powered by leeches, in England.

Dylan Thuras: There’s the Gates of Hell, which is this giant 200 ft hole in the Turkmenistan desert, 45 years later its still on fire. In Peru is the last Incan bridge. There’s A guy named Jim Bishop in colorado whos been buiding Bishop castle for the last 40 years. There are the living root bridges in Cherrapunji India.

Heather McElhatton: Atlas Obscura is not meant to be taken as an absolute authority or global encyclopedia, but more as a jumping off point, to expand our sense of how strange and marvelous the world can be.  It celebrates some of the strangest and most curious places in the world. Everything in the book is a physical place someone to get to, with a latitude and longiutude. Dylan says it’s meant to encourage people to explore the world around them.

Dylan Thuras: The range is something in this that makes you surprized and have this sense of  “Wow I had no idea this existed,” and when you get that sense, your world view opens up a little bit. You start to see the world with more of a sense of possibility of what’s out there and also the possibility for yourself to go have some of those experiences.

Heather McElhatton: At its heart, Atlas Obscura is about passion and the people and places that make this world…strangely beautiful.

Dylan Thuras: I find such joy and wonder in what people choose to dedicate their life to. I find in that really something core about what it is to be a human and what makes people happy. These are people who are fufilled, they are dedicated deeply to what they are doing and I think that makes for an interesting rich beautiful world. That’s how I want to live.