More About "Carl Safina – How Animals Think and Feel"

Carl Safina on his book Beyond Words, How Animals Think and Feel:

Carl Safina: Many people have thought you can’t think unless you have language and humans are only ones with complex language, but there are many things that go on in animal’s minds that don’t involve any words. 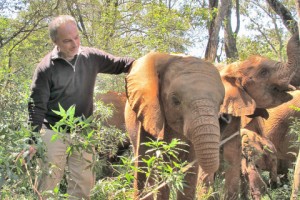 Heather McElhatton: Author and conservationist Carl Safina weaves decades of field observations along with exciting new discoveries about the brain, in his book titled,  Beyond Words – What animals think and feel.

Safina: Beyond Words is about the inner lives of animals. What they think and feel, and really it’s about showing how they live their lives, what decisions they make, and who they are, rather than what they are and how connected we really all are, us and all the other animals.

Safina: You know, when you walk into your house, you don’t say, “Oh this is my house, here I am at the living room, now there is the sofa, I will now walk into the kitchen….” No, you just go around and do what you have to do, without needing words for alot of what we do. As familiar and vivid as that seems to us, is as familiar and vivid as it is to many other animals.

McElhatton: Safina says animals communicate through a wide range of other modalities, many of which we’re just discovering. In Beyond Words, he closely examines some of these alternate ways animals communicate,  like the complex strategies employed by wolves in by Yellowstone National Park, and the astonishingly peaceful society of killer whales in the waters off the pacific northwest, and the extraordinary abilities of elephants in Amboseli National Park in Kenya. The book gives powerful and illuminating insight into the unique personalities and communication techniques of animals, through extraordinary stories of joy, grief, jealousy, anger and love.

Safina: They do think and they do feel. There is overwhelming science to back that up. For one thing, the brains of all vertebrates are basically the same. They 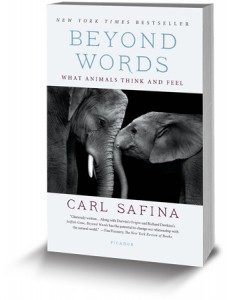 have many of the same structures, all the neurons, the nerve cells are essentially identical in all animals that have nerve cells, which is everything from jellyfish on up, they make the same hormones and the same chemicals that produce moods and trigger moods that are produced in all of these brains.

McElhatton: Safina says the similarities between human and non-human consciousness, self-awareness and empathy  calls on us to re-evaluate how we interact with animals on a wide range of issues, including consumption choices, habitat conservation, poaching, and climate change.

Safina: A beautiful world is where everybody and everything gets to be who they could be. Where humans emphasize the things that we do best, which is compassion. That’s the best thing about us. A lot of times we totally lose it and lose sight of it and emphasize our violence or our selfishness, which we also do more than any other animals, but if we would emphasize compassion we would just be so beautiful to each other an the rest of the living world.

McElhatton: Carl Safina’s book “Beyond Words” shows us we are one interconnected family and there’s more than one way to talk to each other. I’m Heather McElhatton, and this is a beautiful world.

“A Beautiful World” is a news program produced by American Public Media that focuses on inspirational stories from around the world, featuring good news about science, technology, ecology, art, music and medicine. The program is hosted by best-selling author Heather McElhatton.