Jane Goodall on Following Your Heart

More About "Jane Goodall on Following Your Heart" 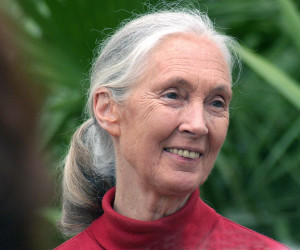 Heather McElhatton: I’m Heather McElhatton and this is “A Beautiful World,” and today we celebrate Women’s History Month, with one of our centuries most powerful female rebels and effective animal conservationists – Dr. Jane Goodall.

Jane Goodall: My mission was to get close to the chimpanzees, to live among them, be accepted. I wanted to come as close to talking to animals as I could. To be like Dr. Doolittle. I wanted to move among them without fear, like Tarzan

HM: Goodall was born on April 3, 1934, in London, England. At the young age of 26, she followed her passion for animals and Africa to Gombe, Tanzania, where she began her landmark study of chimpanzees in the wild,  immersing herself in their habitat as a neighbor rather than a distant observer. Her discovery in 1960 that chimpanzees make and use tools rocked the scientific world and redefined the relationship between humans and animals.

JG: You have to realize that back then there were no people out in the field whose research I could read about, except this one man, and he saw chimps once, maybe twice, in the three months of his study and then much earlier on there was this crazy man who sat in hides and hoped chimps would appear.

JG: I had this probably crazy feeling, that nothing’s going to hurt me. I’m meant to be here.

HM: The film reveals an intimate portrait of Jane Goodall, a young untrained woman, whose chimpanzee research challenged the male-dominated scientific consensus of her time and revolutionized our understanding of the natural world.

JG: After months of patient and tireless observation I’d been rewarded, the chimps had accepted me. And gradually together the chimpanzees, the birds and insects, the teeming life of the vibrant forest, formed one whole. All part of the great mystery, and I was part of it too.

HM: Jane decided to do things her own way, with only her own instincts to guide her.

JG: All the time I was getting closer to animals and nature and as a result, closer to myself and more in tune with the spiritual power I felt all around. I thought, as I have so often since, what an amazing privilege it was to be utterly accepted thus, by a wild free animal.

HM: Goodall loved living in the forest and says she might never have left, but her research showed chimpanzees were disappearng across africa and she needed to do something about it.

JG: So that’s when I realized I had to raise awareness about the plight of chimps in Africa and the role that I must play is to make sure the next generation are better stewards than we’ve been.

HM: Since then she’s worked tirelessly, campaigning and raising awareness and funds to continue her research and protect wild spaces all around the world. In 1977, she established the Jane Goodall Institute to advance her work for generations to come. JGI continues the field research at Gombe and builds on Dr. Goodall’s innovative approach to conservation, which recognizes the central role that people play in the well-being of animals and the environment.

JG: Success comes through determination and hard work,  and the fault is not in our stars, but in ourselves that we are underlings. I certainly believe that’s true. Yet thought I have worked hard all my life I must admit, the stars seemed to have played their part too.

HM: That was Dr. Jane Goodall, speaking about her lifetime conservation work with chimpanzees. The documentary JANE debuts this March on National Geographic and Nat Geo WILD. Visit www.abeautiful.world to learn more.