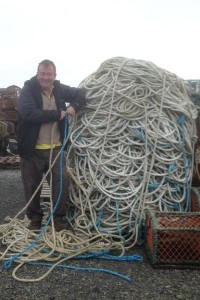 Mark Cook: My name’s Mark Cook and I live in the Orkney Islands, a group of islands at the top of Scotland.  If you look at a map of the UK, and you go to the top, swim six miles north and there’s a bunch of islands.  I’m on the biggest island there.

Heather McElhatton: Mark Cook was born in London, and lived most of his life in Birmingham, an industrial town about as far from the sea as you can get in England,  but now in his 50’s he’s found his true home in the remote Orkney Islands. He and his wife tried to visit the Orkney Islands decades ago.

MC: We came up for a week at the end of November three years ago, fell in love with the place and moved nine months later.

HM: Since moving to the remote island, Mark makes his living driving a taxi, which also means he has some time on his hands between fares. 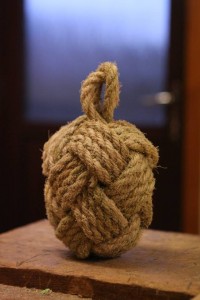 MC: I don’t like to just sit and do nothing when I’m in the taxi waiting for my next hire. I’ve always got a small piece of rope there, and I’m making something or other.

HM: And that’s how he took up the ancient art of tying knots.

MC: I like bringing things back together and doing things with my hands

HM: Mark discovered piles of tangled up old rope washed ashore while walking the vast beaches of Orkney Islands with his dog. 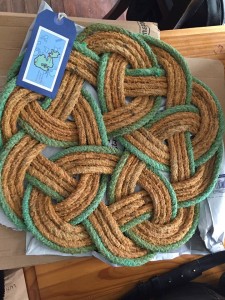 HM: The Ashley Book of knots was written by Clifford W. Ashley, a sailor and author of various seafaring books. Ashley spent 40 years learning about his passion – tying knots, which have names as poetic as their graceful turns, names like “Chain stitch, clove hitch, “Butterfly bend,” “Dogshank, “Turk’s-head,” “Jug sling” and “The grief knot.”

MC: Rope and cordage in those days was such an important tool for them, that they wouldn’t just abandon and leave it and not have another use for it…I think they would be appalled if they saw all this stuff being wasted and not being used.

HM: Mark may live in a remote spot, but he’s a part of a global movement to rid the sea of garbage and up-cycle ocean debris.
MC: When I find a piece of rope washed up on the 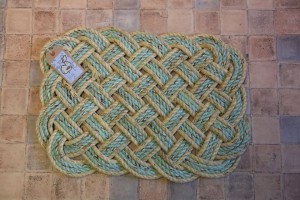 sea, the first thing to do is bring it home, and untangle it, which can be a very time-consuming job.

HM: Next, Mark soaks the rope and washes it – A process his wife is not always crazy about.

MC: St time I do push the limits, when she comes home and finds the bath filled with old rope that’s being washed in the bath for a day or so, to get rid of the sea smell and clean it as best I can.

HM: After untangling the rope, Mark takes it to his work bench and starts weaving it together, using ancient maritime knots and ultimately creating gorgeous thump mats 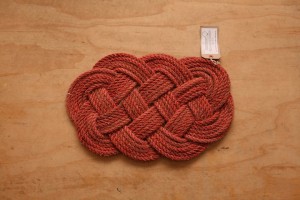 worthy of hanging on a museum wall.

MC: With the piece of rope, depending on the size of it, the thickness of it, and its condition, how worn and weathered it is, I decide what I’m going to make with it. The longer the rope, the more choices I have what I can do with it. With the longer pieces I normally start with making a mat, the Kringle mat, the thump mat, there’s an ocean plait and an oblong mat.

HM: Mark says he untangles the rope and then artistically ‘tangles it back up again.’ You show me how it comes apart and I’ll tell you how it comes together. 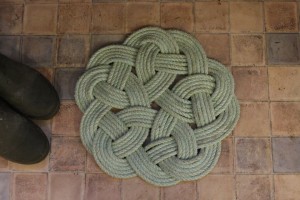 MC: My idea of a beautiful world is just a peaceful one, that’s why I like Orkney so much, its a peaceful place its a very relaxed place, I wish more places around the world could be like this.