A Beautiful World | The World is My Country
1244
portfolio_page-template-default,single,single-portfolio_page,postid-1244,ajax_updown_fade,page_not_loaded,,qode-child-theme-ver-1.0.0,qode-theme-ver-7.6.2,wpb-js-composer js-comp-ver-6.0.5,vc_responsive

The World is My Country

More About "The World is My Country"

Arthur Kanegis: Garry Davis was an everyday man with an extraordinary story. He was a song and dance man on Broadway,  who was so horrified by bombing a city in World War II, and his own brother being killed, that he said “I’ve got to do something to stop the next war.” He saw the Hiroshima footage and he said “Humanity is in trouble but what can I do? I’m just an actor.”

Heather McElhatton: Arthur Kanegis is the director of a documentary called, “The World is My Country,” the story of Garry Davis, a Broadway song and dance man, who was driven to renounce his American citizenship after WWII.

Arthur Kanegis: He came up with a brilliant idea, he went to Paris in 1948, where the UN was meeting, and he leapt up in the middle of the assembly, and in a grand act of political theater, he says something so riveting an audacious he gets big support from the people of Europe.

Garry Davis: I jumped over the balcony shouting, “I interrupt! I interrupt! The nations you represent divide us! And lead us to the abyss of total war! What we need is one government for one world, and if you won’t do it, step aside and a peoples world assembly will arise from our own ranks, because we can be served by nothing less!”

Heather McElhatton: Davis also gave up his American citizenship, and surrendered his passport. 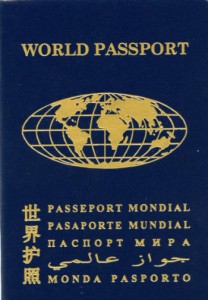 Garry Davis: I head to Paris, I march into the U.S. embassy, and I officially give up my exclusive National Citizenship.

Heather McElhatton: With no passport, no citizenship, and no country to call his own, Davis had no official documents or ID, and was denied entry into any European country. He wound up living on a bridge between the borders of France and Germany. So began a global movement and a personal Odyssey, that routinely landed him in jail.

Garry Davis: Over the years I’ve been in 34 prisons. 34 prisons in many countries, not because I committed a crime but simply because, as happens to many people, they have no documents.

Heather McElhatton: Davis spent the next 65 years of his life as a self-proclaimed, “citizen of the world.” He traveled the globe on a ‘World Passport’ which he made himself and had adventures so unique they made headlines in the New York times. Garry Davis was encouraged by Eleanor Roosevelt to create a global government, he was hailed by Buckminster Fuller as, “A New World Man,” and he was praised by Albert Einstein for, ‘the sacrifices he made for the well being of humanity.” This culminated in Davis founding the WORLD SERVICE AUTHORITY, an office based in Washington D.C. that to this day issues “World Passports” to anybody who wants one. These are not assured travel documents, but serve as a human rights tool, and have been accepted by border guards in multiple countries.

David Gallup: If you live in a place where you have your home, your family, your language, your culture – you love it. you’re proud of it. You want to stay there.

Heather McElhatton:  David Gallup is the director of the World Service Authority.

David Gallup: But, all of a sudden, if some marauding army or militia comes after you, you gotta get out of there. What happens if your country because of global warming becomes flooded with water, who’s going to take you in? Where do you go? They don’t have time to get a document from the government, they need to flee immediately. And so we can come into the situation and issue them a document as quickly as we can, to get them something, so they can cross a frontier and show something, because a border official won’t stamp your hand, they want a piece of paper that they can look at, and put a stamp in.

Heather McElhatton: The title The World is My Country,” is taken from a Thomas Paine quote, “The world is my country, all mankind are my brethren and to DO GOOD is my religion.” You can visit www.theworldismycountry.com to learn more about Garry Davis and to sign up for your own WORLD PASSPORT. I’m Heather McElhatton and this is A Beautiful World.