A Beautiful World | A Year in the Lives of North American Owls
1196
portfolio_page-template-default,single,single-portfolio_page,postid-1196,ajax_updown_fade,page_not_loaded,,qode-child-theme-ver-1.0.0,qode-theme-ver-7.6.2,wpb-js-composer js-comp-ver-6.0.5,vc_responsive

A Year in the Lives of North American Owls

More About "A Year in the Lives of North American Owls"

A conversation with Paul Bannick, conservation photographer and naturalist, about his new book Owl: A Year in the Lives of North American Owls.  (Braided River, 2016)

Paul Bannick: Owls are pretty incredible. They transfix us, they get into our imagination. But yet they come out and are active at times that scare us, or in places that scare us, at twilight or dusk, in graveyards or dark forests.

Heather: That’s Paul Bannick, he’s a conservation photographer and a naturalist, and he works full time for Conservation Northwest, which helps protect wild lands and restore vulnerable species in Washington and British Columbia. Of all the species Bannick photographs, he has a special and unique love – for owls.

Paul Bannick: We give them traits or features that are otherworldly or supernatural, and while that’s beautiful and poetic, I also think there’s a danger to that. Because although their beauty has the power to inspire us, it’s really important to de-mystify them, and to look at what they really need. 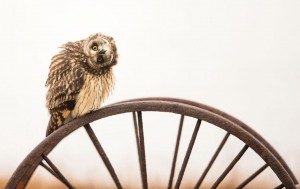 Heather: Bannick’s book, “A Year in the lives of North American Owls,” watches owls as they move through each season and a series of life stages, from courtship and nesting, to hunting and raising young, to watching those young gain their independence. All the detailed and stunning pictures in his book took phenomenal patience and persistence to get. One image in particular, a shot of a baby Great Grey Owl deliberately leaving the nest, took ten years and multiple failed attempts to capture.

Paul Bannick: They would fall out of the nest, they’d get knocked out by a sibling as the sibling was flapping around, they’d leave when I was recharging my batteries or using the restroom, or they’d leave the nest in the middle of the night. It was incredibly frustrating. 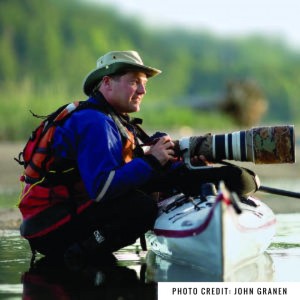 Paul got the shot in Alaska.

Paul Bannick: 50 feet up, in a mistletoe matt, a youngster, a fluffy ball of feathers, waddled over to the edge of the nest, shook himself off, squatted down, and then fully extended his legs, leaping off that nest 50 feet up, unable to fly, awkwardly flapping his wings with these big long legs hanging forward, and he fell with a bounce to the ground below, and I… could not believe it.

Heather: But before Bannick could enjoy the moment, another baby owl went up to the side of the nest, and did the exact same thing. Then a third baby owl followed.

Paul Bannick: I was able to watch three owls leave the nest, after waiting ten years to watch one leave.

Heather: These rare moments are worth the wait for Bannick, because he wants people to love owls as much as he does, to help ensure that owls will be with us in the future.

Heather: Bannick says the most important thing people can do for owls is number one, to protect public lands. Number two, retain standing dead trees, because that’s where owls nest, and number three, to create owl habitats wherever you are, on your own land, in your back yard, on your rooftop or at your nearby public park.

Paul Bannick: People can put up nest boxes, and they will readily take to those nest boxes, and you can watch their courtship and watch them bring food to their young, and you might find pleasure in one of the reasons they live so well alongside people, which is they like to eat the rodents that are attracted to human dwellings.  I think a beautiful world is where we understand we’re part of this natural web, we’re not apart from it. We’re part of it. That doesn’t mean we have to live in tipis and only eat what we grow, it doesn’t mean anything like that. But it means we are basically entirely responsible for the natural world around us, and I think in a beautiful world we recognize that, and we celebrate that, and we ensure it will continue after us.

A Year in the Life of North American Owls

How to build a Screech Owl Box

How to build a Barn Owl Nest Box