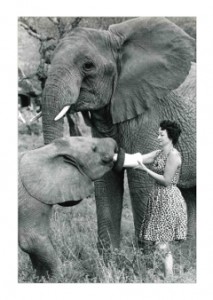 Why do elephants line up to hug a little old lady in Nairobi National Park? She’s their mother. Their adopted human mother. Dame Daphne Sheldrick. Daphne has been saving orphaned baby elephants in Africa for over fifty years now, rescuing hundreds from certain death after their families were slaughtered by poachers for their ivory tusks.  The ivory trade has decimated elephant populations across Africa as poachers hunt mature elephants for their tusks, which are made of ivory and in high demand from markets primarily in the U.S and China. 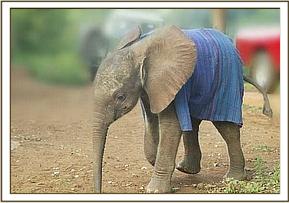 An Elephant dies every 15 Minutes

“An elephant is killed every 15 minutes.,” says Robert Brandford, the Executive Director of The David Sheldrick Wildlife Trust. “At this rate, there won’t be any wild elephants left in twenty years. The species will die out in our lifetime. And for what?  Ivory isn’t used for medicine or food, it’s used to ornament rooms. It’s a decoration. To think we will lose an entire species for decoration is heartbreaking. Elephants are a keystone species.  If we lose elephants, we lose other species as as well.”

Orphaned elephants stand no chance of surviving on their own, they need their
families to survive. Elephants mature at roughly the same rate that humans do, their lives can span 80 years. Just like human babies, baby elephants completely depend on their families for survival,  for the first ten years of their lives. Their mothers provide them with milk for the first two years after they’re born, and the extended herd provides physical protection from predators. Without their families, orphan elephants die. 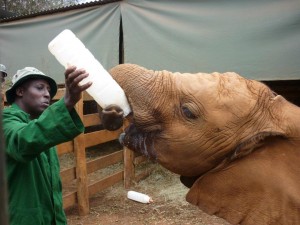 “For elephants, family is everything.” Daphne says. “Their relationship with their families goes on long after death. You’ll see elephants returning to the spot where a loved one has died, to visit their bones. And sometimes they’ll carry off a bone with them.

Daphne knows elephants in a way few humans do. She was born in Kenya during the summer of 1934. She grew up on her family’s farm, exploring the wonders of East Africas Great Rift Valley with her siblings, and her earliest memories were surrounded by animals and for her, it was completely normal to take a walk through the forest accompanied by a pack of family pets, which included a mob of dogs, Bob the impala, Daisy the Waterbuck and Rickey-Tickey-Tavey, a dwarf mongoose who ran ahead and led the pack down the scrub-lined trails.

Later in life, from 1955-1976, Daphne worked alongside her husband, David Sheldrick, the first and founding warden of Tsavo National Park in Kenya.  Tsavo covers over eight-thousand square miles, and was wild, rugged terrain back then, thi 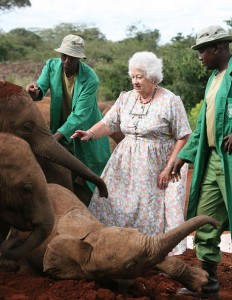 ck with bush, tangled with vegetation and heavily populated with large herds of wild animals.  As the founding warden, David was tasked with creating the first roads inside the park and building an infrastructure that would allow humans to visit and experience the vast, untamed African wilderness for themselves.

During that time, they lived inside the park and interacting with wild animals became a routine part of their daily lives.  Whenever someone found a wounded or infant animal requiring assistance, they alerted the Sheldricks, who frequently took them in, and lived side-by-side with them. “There are photographs of Daphne having tea on the lawn with baby elephants,” Brandford says. “And elephants in the kitchen and sleeping in bed with her daughter. It’s marvelous.”

Daphne says her passion for Nature and philosophies about wildlife were heavily influenced by this time working with David, and guided her future endeavors to continue his work, after he died

“David’s philosophy played a very important part in my understanding and interpretation of animal behavior. He believed that wild animals were, in many ways, more sophisticated than us humans, more perfect in terms of nature, honed by natural selection over millennial and specially adapted for the environmental slot they occupied, contributing to the well-being of the whole. He was intolerant of those who viewed anim 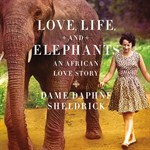 al intelligence as inferior to that of the human animal, for in his view, each species had evolved along a different branch of life in a way that suited its purpose; there were bound to be things that we humans would never fully understand about animal intelligence, and those who claimed they did merely illustrated ignorance. ‘The more you know, the more you know you don’t know,’ he said. We should never be so arrogant as to believe we have all the answers.” 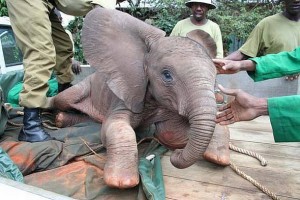 The Sheldrick Trust has adopted and raised hundreds of elephants during its lifetime. Brandford says it costs about $900 – $1,000 per month to raise a single elephant, or twelve-thousand dollars a year. The average orphan must stay at the Sheldrick Center for about a decade before it can be returned to the wild,  which means it costs about one-hundred-twenty-thousand dollars to save a single elephant.

The center relies heavily on its fostering program to pay for their many expenses, “you can foster an elephant for as cheaply as $50 a month,” Brandford says. “People often donate more, but every little bit helps.”

That money pays for milk, hay, medicine, shelter, anti-poaching patrols, rescue vehicles and keepers, one of the most critical components of the Sheldrick center. The keepers are human beings who work at the center and essentially replace the elephants lost family. The keepers stay with the elephants 24 hours a day, sleeping in the same pens with them, waking every day at 6a.m. and walking miles across  the park together during the day,  feeding the baby elephants milk every three hours, before returning together to the their shelters at night. 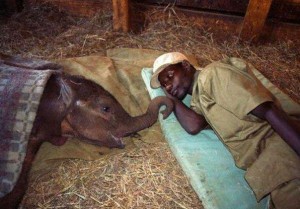 Not everyone can become a keeper. Brandford says the elephants decides who will work with them. “We get many requests from people who want to be keepers, and if we interview them and deem them compassionate and they understand why we exist, and what we need to do and they understand the role, that person will then spend time with us in the Bush with the other keepers and with the elephants, and it’s all about whether the elephants accept that individual. There are some people they will just not take to and they’re reading the heart of that person, and sensing something in that person they can’t relate to, and there’s no empathy.

Then there will be other people they take to immediately. Elephants can sense the 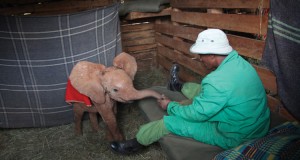 goodness…or not..in an individual around them and you can see that every time people come and visit our elephants – we’re open an hour every day – you see these different interactions, and you can see where the elephants are obviously reading goodness in people and are automatically drawn to them. We have one keeper for example, a gentleman named Mishak Nzimbi, who’s been with us for twenty years now, longest standing keeper, and we call him “Mishak Magic,” because he has something about him that every infant elephant, even those in the worst possible condition and health, they take to him and he can bring them back from the brink just by being who he is and its incredible to watch.”

Daphne agrees. “You can tell who’s a good keeper and who’s not by how the elephants respond to them.” she says. “They can read your heart.” 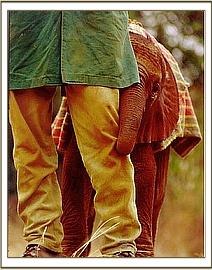 These special animals need help if they are to survive, and that help has to come from people all over the world. People who want to save the worlds largest land mammal from certain extinction. “It’s sad to say,” Brandford says. “But today in the wild, you’ll see elephants turn their heads and hide their tusks from people,  because they know they’re being slaughtered for something on their face.”

Brandford says there is good news on the horizon. Last September (2015) President Xi Jinping of China stood next to President Obama on the White House steps and announced a joint effort to ban all ivory trade in their respective countries. From the White House press room: “The United States and China commit to enact nearly complete bans on ivory import and export, including significant and timely restrictions on the import of ivory as hunting trophies, and to take significant and timely steps to halt the domestic commercial trade of ivory.”  This is a huge step for China, Brandford says. “If they follow through with their promise, China could single-handedly save the species.”

For now, Brandford says there’s plenty we can do right now to help save elephants. “What I want people to do, is go to our website and spend time learning about what we do and the elephants we’re trying to save. Then, if they’re so moved, they can contribute, volunteer or adopt an elephant for fifty dollars a year.  They can even come and visit their foster elephants here at the center. The center is only open an hour a day to the public, We have special visiting hours for foster parents. Or they can share pictures of our elephants on social media, spread the word about what we need to keep on saving elephants, because people want to help, they really do, they just need to know how to.”

How you can help 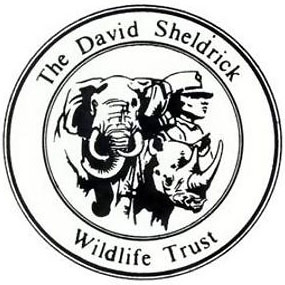 All photos are courtesy of David Sheldrick Wildlife Trust. 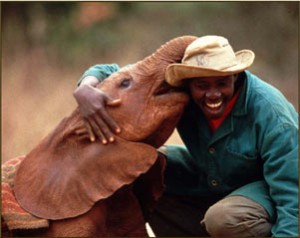 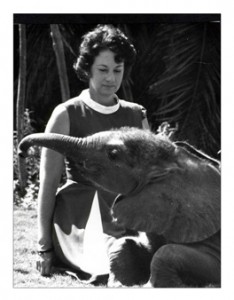 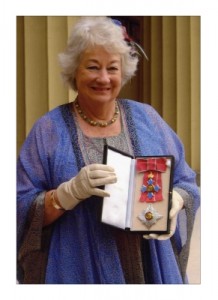 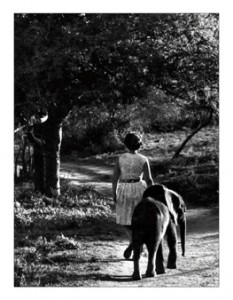