More About "The Last Butterflies"

Nick Haddad studies the very rarest butterflies in the world. He’s a professor of integrative biology at Michigan State University and lives in Kalamazoo. His new book is called “The Last Butterflies: A Scientist’s Quest to Save a Rare and Vanishing Creature.”

The book focuses on scientists’ efforts to save six butterflies in particular — the six rarest species on earth. They are the bay checkerspot, Fender’s blue, crystal skipper, the Miami blue, Saint  Francis’ satyr, and the rarest butterfly in the world, the Schaus swallowtail, whose habitat is sadly found in the sprawling metropolis of Miami. Of all six species together, only about 3,000 remain.

“They’re on the edge of extinction. Some number in the thousands, some the hundreds, some less. I could fit them all into a ball the size of a softball,” Haddad said. “And so this is almost no butterflies. They’re so close to extinction that we’re just doing all we can to try to  avoid the inevitable loss of the species.”

Haddad discovered that butterflies not only need habitat to survive, they need whole ecosystems that “get disturbed” from time to time. He learned this when he landed a job at the Fort Bragg Army base in North Carolina. The base had  called Haddad in to help with the endangered Saint Francis’ satyr.

What’s fascinating about this butterfly, Haddad said, is that it lives primarily in artillery impact areas. “That’s where they’re firing live artillery and bombs. And so it was this crazy scenario where the butterfly was living in what seemed like the worst place for it to live. And it turned out to be the best place for it.”

This is due to the strange and poetic fact that these delicate butterflies actually need fire and flood to survive. The floods create wetlands and the fires combine disparate colonies. Butterflies need what happens naturally in whole ecosystems — and what man has worked tirelessly to eliminate.

“We don’t think of artillery ranges as being the beautiful places, but turns out that they are because the artillery has this side effect,” Haddad said. “It creates fires that burn across the forest. And the interesting thing is that those fires replicate the natural fires.” 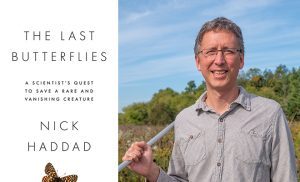 “Keeping habitat set aside for butterflies and other organisms is critical to conservation. I mean, if I track through the history of all the rarest butterflies, their habitat is being lost because we’re covering them with cities or fields,” Haddad said. “And you know they’re down to the last little places on the face of the earth for them.”

Haddad says the first thing people can do is learn the names of local butterflies. Many of us have bird books and bird feeders and enjoy looking at the birds in our backyard. 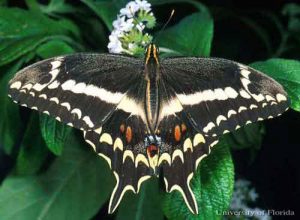 Haddad stresses that wanting to help is not enough. Taking action is the only thing that will help butterflies survive.

“And so my students and I created big experiments where we disturbed places. We cut trees, we flooded areas, and the things I just didn’t want to do … But then I saw the butterflies rebound.”

Now, a quarter of the world’s population of the Saint Francis’ satyr resides in the landscape Haddad and his team have altered. This assures him they’re on the right track. Understanding the basic biology of butterflies, and then being very deliberate about how they employ habitat restoration, have turned the fate of the  Saint Francis’ satyr in the right direction. He is confident that it will persist, and that its populations will grow and perhaps one day thrive.

Haddad’s idea of a beautiful world is one where nature is connected. “Where natural areas permeate through cities and farm fields, and extend into the truly natural wilderness areas. Where we have nature that’s incorporated into our working lands and urban landscapes as well.”