More About "The Photo Ark"

For many of Earth’s creatures, time is running out. Half of the world’s plant and animal species will soon be threatened with extinction. The goal of Joel Sartore’s “Photo Ark” is to document biodiversity, show what’s at stake and to get people to care while there’s still time. Over 6,000 species have been photographed to date, with more to come.

Joel Sartore: Photo Ark is a 25 year effort to try and get the world interested in saving the planet, in saving life on earth. 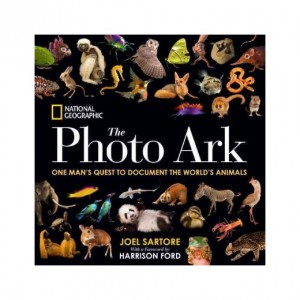 Geographic photographer and he’s most passionate about ONE THING – getting you to SEE animals and connect with them on a deeper level. Over the past two decades he’s photographed over 5,000 animals for a project he calls the Photo Ark. Collecting images of animals great and small, who are all endangered or under threat. Everything from the Utah milk snakes, to Sumatran tigers, Gray Gibbons, Poison Dart Frogs, polar bears, spotted jellyfish, giant pandas, Peregrine Falcons, and the Sulawesi stripe-faced fruit bat. Joel takes their pictures and collects them in his Photo Ark.

JS: I was really concerned people weren’t engaging with wildlife and I thought whats the simplest way to do this and I thought well we’ll eliminate all distractions and be able to look animals in the eye, and we’ll make them all equal size without size comparison, there’s nothing in the image but the animal, on a black or white background – a mouse is every bit as important and lovely as an elephant. 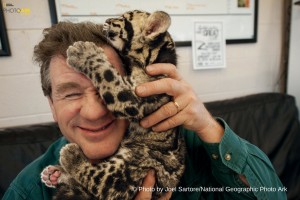 HM: The power of Joel’s images is both their detail and their simplicity. He takes high-resolution portrait shots of every animal and shoots them against a solid black or white background, so you can really study them outside their natural habitats.You can see their faces, and their details and get to know them like you never have before.

JS: You know when an animal goes extinct, and I’ve photographed several animals that are gone now, it makes me sad of course, but it also inspires me to tell their story. I just try to tell the world this is critical and as these species go so could humanity. After all, when we save these other species, we are actually saving ourselves. We have to have bees and butterflies to pollinate fruits and vegetables that we eat, we have to have healthy intact rain forests, not just for the animals that live there, but to help regulate climate. They allow precipitation to come where we know how to grow crops. So there’s a lot in it for humanity to save all the other life forms.

HM: Joel has taken his favorite images from the Photo Ark and published them in a book called: PHOTO ARK – One man’s 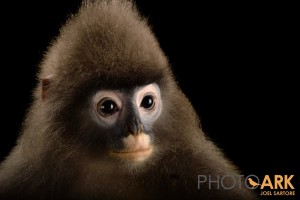 quest to document the world’s animals, which contains over 500 images of rare and endangered animals. Throughout the book are stories of conservationists and individuals who are working to save, restore and maintain species around the world. These stories, Joel says, are important to him,  because they highlight the power of optimism and the power of the people.

JS: Because it shows we can turn things around. That we don’t have to lose half of all species by 2100, which is where we’re headed to go. We need to save big blocks of rain forest, big blocks of ocean, we need to preserve habitat, not only for the species that live there, but for ourselves as well, we need clean air and food to eat, we’re talking about big issues here and I want to show people who are doing positive things and getting real results. You don’t have to save the world, you can just save what’s in your backyard and that’s literally what those people are doing, so they are heroes to me.

HM: Joel says everybody can help. you can become a member of your local accredited zoo  and you can start backyard projects that help animals, like creating habitats for them or growing food sources for them,  like planting milkweed to help Monarch butterflies. You can also go to www.natgeo.com and study up on species around the world that need your help. 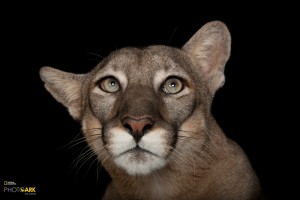 JS: Well, my idea of a beautiful world is where people talk to each other and are kind. Kind to each other but also kind to nature. Like it or not we really need nature to survive.

HM: You can see Joel’s images and the endangered species he’s collected in the Photo Ark Online at www.abeautiful.world.  I’m Heather McElhatton, and this is A Beautiful World.

Brought to you w help from The Pohlad Family Foundation