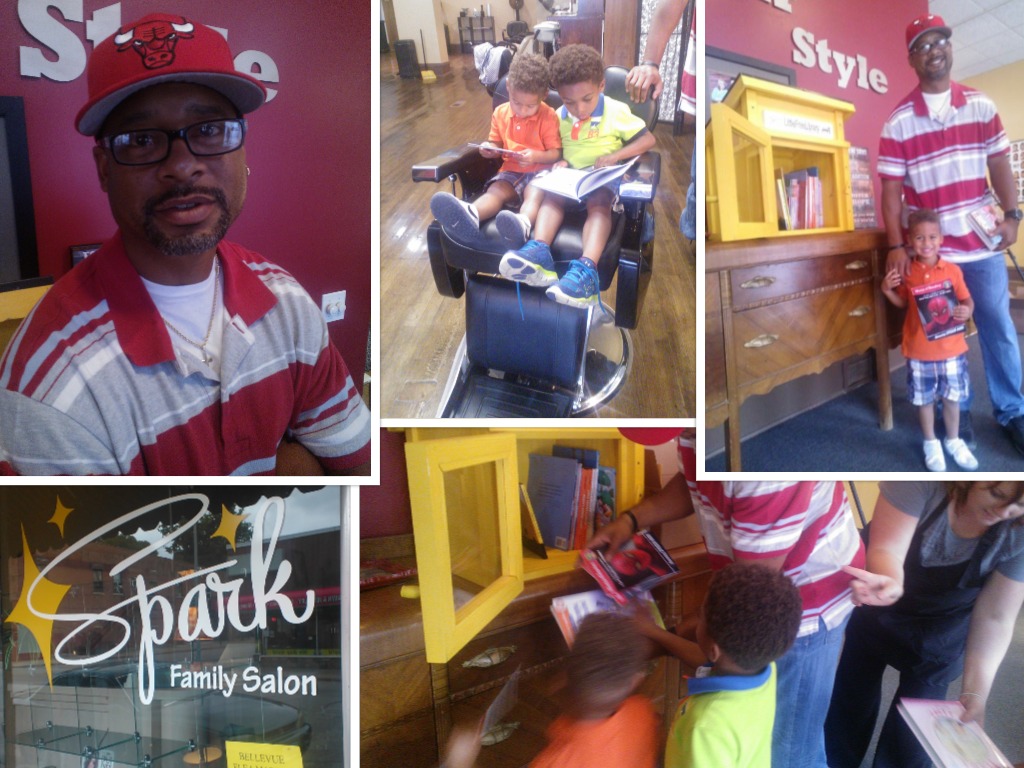 More About "The Storybook Barbershop"

Barber gives free haircuts to kids who read out loud for him.

Once upon a time, there was a little barber shop in Downtown Dubuque, Iowa called the Spark Family Hair Salon. It’s a friendly and cozy place, even though it’s located on a not-so-great street, in an economically-challenged neighborhood, nestled right between a gun store and a pawn shop.

Inside the little salon is a barber named Courtney D. Holmes, (pictured left) a forty-five year old man with horn-rimmed glasses, an easy smile and wide shoulders, who gives free haircuts to underprivileged kids, in exchange for them reading out loud to him. “I’ve got two sons of my own.” he says. “I just want to help kids start reading.” 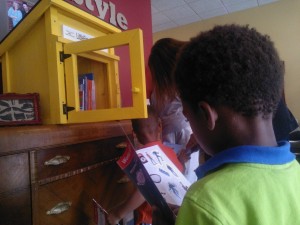 It all started earlier this month, at Dubuque’s second annual “Back to School Bash” in Comiskey Park when Anderson Sainci, (pictured right)  the city’s Resource Manager for the Public Works Department volunteered to put an event together in order to, “connect people to people and people to resources,” which involved nonprofits and other community partners, including the Dubuque Black Men Coalition and the St. Mark Youth Enrichment Program, who worked together to provide free resources for some of the city’s youngest underprivileged students. They gave away free school supplies, free backpacks and in Courtney Holmes’ case – free haircuts.

Response to Holmes free haircuts was so strong, that the Spark Family Hair Salon has decided to make this a permanent monthly event the first Tuesday of every month from 4-6pm. Word of the story spread outside the city, prompting cash and book donations to the program. The folks at Little Free Library in Minneapolis sent the salon a mobile library packed with kids’ books and the author Frank Murphy, who wrote the book “Babe Ruth Saves Baseball,” which first appeared in press photographs, sent the salon a whole case of autographed books.

Babe Ruth is a fit icon for this story, the legendary underdog baseball player who once said: “The way a team plays as a whole determines its success. You may have the greatest bunch of individual stars in the world – but if they don’t play together they’re not worth a dime.” 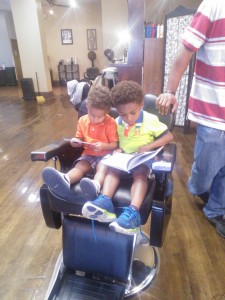 Frank Murphy says Courtney’s story inspired him and he wanted to help.  “With regards to what they’re doing, it’s huge. I’m a teacher and there’s such a problem with literacy, especially in the summer. Kids lose so much ground with reading in the summer. No matter where you teach, there are kids who come not ready for school, because they don’t have the means. What Courtney did was just completely unique, I’ve never seen anybody do what he did. Hopefully it’ll just grow and go viral and every barber shop in America will try to impact neighborhoods with kids.”

Murphy, who has taught elementary school for 23 years, says getting kids to read has always been a challenge. He found there wasn’t enough books about women in history or enough books for boys to read – so he started to write books himself in his second grade classroom and had his students illustrate them. It took about six years for him to get his first book published and he now has eight published (pictured)  and one of them was the book nine-year-old Jeremiah Isaiah Reddick chose to read when Courtney Holmes cut his hair at the Back to School Bash.

Jeremiah goes to Lincoln elementary school and starts classes September 1st. His mom, a single parent with two other kids says getting free haircuts for her kids makes a big difference financially. “You want to do what you can,” she says. “…and this helps.” 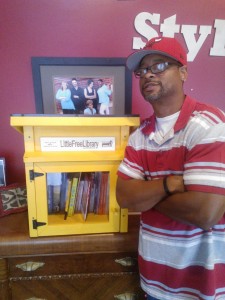 A Haircut Can Help

For barber Courtney Holmes, the problem is much bigger than a haircut – but a haircut can still help. He says, “We’re trying to reach our low-income kids of color. Because when the numbers come out, it’s our kids that are lacking.  Jeremiah’s mom is alone. She has four kids and she’s by herself. If she gets a job, most jobs around here pay $8 or $9 bucks an hour. How is she going to pay for day care? She’s still got to pay bills, buy food, pay for a cell phone, then you spend less time with your kids. So who’s going to help you? We want to get resources to parents to let them know we’re here and we want to help. We know they want their kids looking good for school.”

Holmes hopes that his program spreads to other barber shops across the nation. “It would be awesome. You could put a sticker in your barbershop saying you’re a storybook barbershop. How cool would that be? Go around and give out books to barbershops and say, “Do you want to join in on this” Then they can put a sticker in their window with a barber cutting a kids hair who’s reading a book and then everyone will know, “Oh, that’s a storybook barbershop. Let’s take our kids there.”

As for his “small act of kindness” going viral and with a record number of people sending books and money to the program and a flurry of national  talk show producers booking him for appearances, Holmes smiles and points his finger heavenward.”All I can say is that I give God all the glory for what’s happening. Nobody could make something this small of a gesture this big.”

Holmes challenges everyone in the nation to start helping kids in their neighborhood read.  However this story ends, the journey will be long. But maybe Babe Ruth put it best when he said: “You just can’t beat the person who never gives up.”