More About "Dispatches from Planet 3" 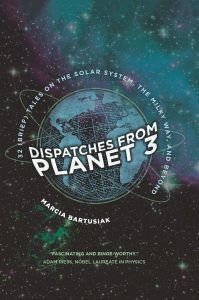 Heather McElhatton: I’m Heather McElhatton and this is A Beautiful World. This week we talk to Marcia Bartusiak (Bar-too-shack), a professor of the practice in the graduate program of science writing at MIT about her new book ‘Dispatches from Planet Three, 32 brief tales on the solar system, the milky way and beyond.

Marcia Bartusiak: It’s a collection of cosmological essays for the armchair astronomer, from the solar system, out to the big bang. But also providing the back story on how those ideas came to originate.

HM: One of the reasons she called the book, ‘Dispatches from Planet Three,  is that’s part of the earth’s address.

MB: We are planet three, solar system, on the Sagittarius spiral arm of the milky way, Virgo super cluster, universe, multiverse. We have a very long address.

HM: And our neighborhood is filled with mysterious residents.

MB: One of the most spectacular discoveries in astronomy in recent years – it just got the Nobel Prize last year – and that was the discovery of gravitational waves.

MB:  It also means that as really heavy masses, like two black holes or two neutron stars spinning around each other, they would cause these undulation, these waves to spread out, just as a pebble dropped in a pond will send out ripples, two black holes spinning around one another will create waves in space time. They would literally stretch and squeeze you like an accordion.

HM: Bartusiak says we don’t have to worry about that stretching and squeezing here on earth. Since 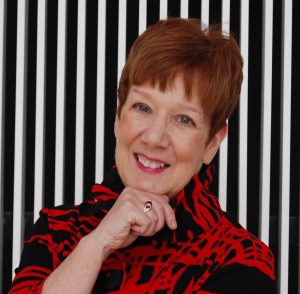 there are no black holes relatively near us, by the time gravitational waves arrive on earth, they’re smaller than the width of an atomic particle. That doesn’t mean there’s nothing to worry about. We’re all going to be recycled. Even the earth will one day be recycled.

MB: Because 5 billion years from now, our sun will begin to turn and expand, its ashes will go into the interstellar pool and one day be reabsorbed into another star

HM: Bartusiak’s philosophy is to enjoy your life – right now.

MB: I believe like everything else in the world, the tree outside my window, my dog, the fish in the sea, that we all come to an organic end. So that’s why we have to appreciate this world even more. Because we do have just a slice of time when our conscious is active and taking this all in. So we need to appreciate it as it is happening.

HM: More on Marcia Bartusiak and her book, “Dispatches from Planet 3,” online at: a beautiful dot world. I’m Heather McElhatton, and this is A Beautiful World

Brought to you with help from the Pohlad Family Foundation.