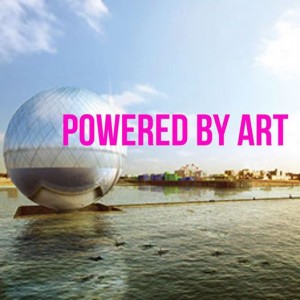 Connie Hedegaard: “When it comes to renewables it’s not a question of ‘nice to have.’ The world of the twenty-first century needs to have more renewables.”

Connie Hedegaard: “We’re seeing here in Denmark, it is doable. We see it in Europe, but I think in order to scale things up, it would be so good to have some more input from artists, from creative thinking people, who know how landscape things in a better manner, who can show the attractive visions. Who can show that to take climate change seriously, its not about gloom and doom. It can be a positive vision, it can create beauty, it can create something that all of us would like to be a part of.”

Robert Ferry: The Land Art Generator Initiative, or LAGI for short, is a global inititive to invite creatives around the world to imagine the beauty of our renewable energy landscapes of the future. 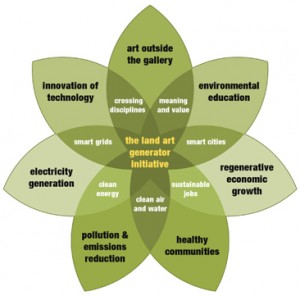 Heather McElhatton: LAGI is held in a new location every other year, and has several other ongoing projects throughout the globe, but its goal is always to create public art that generates power on a utility scale.  Imagine a work of art, an artistic structure or public scultpure, that can also power your house.  It’s called “Solutions Based Art.” Elizabeth Monoian, Robert’s wife and co-founder of LAGI, says artists, architects and designers worldwide are excited about it.

Elizabeth Monoian: The submissions were really fantastic. It took our breath away to see that teams came together around this idea.  We asked for something and they did it. I think it struck a chord.

Heather McElhatton: The designs that LAGI has developed are global, massive and incredibly beautiful, like the structure called, “Light Sanctuary,” set in a vast desert outside Dubai, where an long snaking sheet of orange solar film wraps back and forth across like a huge ribbon candy.  Only this ribbon candy isn’t just sweet to look at, it also generates over 450 megawatts of renewable energy.

“The Pipe,” presented at this years competiton in california, is a huge glass and metal cigar-shaped structure that rolls gently in the waves off the santa monica pier, glinting elegantly in the sun, using only wind wave and solar power to collect, desalinate and create fresh drinking water. These are just a couple of the renewable energy art projects LAGI has produced, and Ferry says there is a beautiful world of more renewable energy art waiting

Robert Ferry: Alot of the message about climate change is a bit doom and gloomy. You’ve got these warming heat map projections of the planet through the end of the century, you’ve got projections of sea level rise engulfing coastal cities, while those things are true and scientific fact, dwelling on that sometimes has the effect of turning people off or resigned to this sort of terible fate. this doesn’t have to be doom and gloom, this is something we can all desire to have and it can make our world beauitiful and we can actually turn the tide on this process together.

Robert Ferry is the Co-Founder of the Land Art Generator Initiative and Studied Impact. His focus is on designing buildings that go above and beyond current popular notions of sustainability to achieve complete harmony with their local and global environments and with the people that use them. His designs of “positive-impact” buildings that double as renewable energy power-plants have been featured in “Superlative Emirates” (Daab Publishing), several Popular Science M 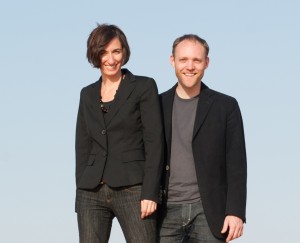 agazine articles, and have been shown at international exhibits. The Land Art Generator Initiative has been in feature articles in numerous international press outlets, including The New York Times and Dwell Magazine. While based in the UAE, he has consulted on such projects as Masdar City and ADNOC HQ. Robert is a graduate of Carnegie Mellon University and a licensed architect.

Elizabeth Monoian (MFA, Carnegie Mellon University) is the founder and director of Society for Cultural Exchange (SCE), an organization that is developing global partnerships between private and public entities around interdisciplinary projects that address issues of climate and sustainability through the lens of creativity. She works closely with cities, universities, corporations, arts organizations, and community groups to design customized approaches to renewable energy installations.

Under SCE she co-founded the Land Art Generator Initiative (LAGI), an international initiative activating interdisciplinary teams to conceive of large-scale public artworks for specific sites that artfully provide utility-scale clean energy to the city grid. The project combines renewable infrastructure design with international cultural exchange and community educational outreach. The project has been featured in articles in numerous international press outlets, including The New York Times, Huffington Post,  the Guardian, and Dwell magazine. Through the LAGI project Elizabeth has published, exhibited, and presented globally on the aesthetics of renewable energy and the role of art in providing solutions to climate change.